VFR Over the Top Rating

Flying VFR Over-the-Top means flying with visual reference to a layer of cloud instead of the earth’s surface. This type of VFR flying offers challenges that require advanced training in instrument flying and radio navigation skills. It also requires advanced training and skill in interpretation and application of weather reports and forecasts. Like the Night Rating, the VFR Over the Top rating adds an element of safety to your flying skills, and it is also fairly quick and simple to obtain. 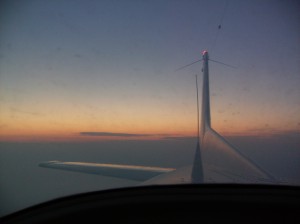 The VFR OTT Rating consists of 15 hours of dual instrument training and will cost approximately $2100. There is no written test or flight test, but you must have a Private Pilot Licence to obtain a VFR Over the Top rating. If you are interested in a Commercial Licence, the hours required for the VFR OTT Rating are included in your Commercial Pilot Licence training. To see a breakdown of the training that goes into a VFR Over the Top Rating, checkout this link to the Transport Canada website.